You are here: Home › presentations › Microbial community composition of biological soil crusts and subsoil in the Kalahari

The Kalahari of southern Africa is characterised by sparse vegetation interspersed with biological soil crusts which deliver a range of ecosystem services including soil stabilisation and carbon fixation. The crusts vary in morphology from barely aggregated sand grains, to strongly aggregated thick crusts with dark pigmentation. Crust morphology and development is largely dependent on the frequency and intensity of disturbance. Much of the Kalahari is utilised for pastoral farming, and this has a striking effect on the vegetation as well as the soil crusts. Heavy grazing pressure commonly leads to shrub encroachment, the removal of palatable grasses, and destruction of soil crusts. 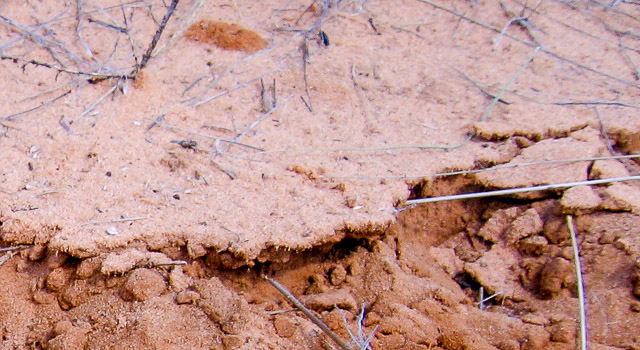 Although soil crusts from different areas can appear similar, our hypothesis is that morphologically similar crusts in different niches contain distinctly adapted microbial communities, and that these will also be significantly different to the populations of the subsoil. Crusts under shrubs, for example, are likely to receive more carbon and nitrogen input from leaf litter compared to crusts in grass interspaces. Thus one might expect greater photosynthesis and nitrogen fixation potential in the crusts from grass interspaces.

We explore the adaptations of soil crust microbial community structure to four niches in the Kalahari Sand, and interpret the potential functional significance of this with respect to a suite of measurements taken from the same site over several years. We identified four areas within a lightly grazed area typical of much of the Kalahari in Botswana. These were interspaces near perennial grasses, interspaces near annual grasses, areas under shrubs, and areas under trees.

The areas under trees were all heavily disturbed by cattle seeking shade and consequently without a biological soil crust. All other areas harboured morphologically similar early-stage crusts. Soil crusts and immediate subsoil samples were subjected to viable counting to estimate the number of bacteria and fungi present. Furthermore, DNA was extracted in the field and subjected to high-throughput DNA sequencing of bacterial and fungal ribosomal gene sequences in order to identify the organisms in each crust. Bacteria numerically dominated all samples, with viable counts (expressed as colony forming units; cfu) for crusts and subsoil all in the order of 106 cfu g-1 whilst fungi varied between 103 – 106 cfu g-1 . For all crusted areas there was a greater number of fungi in the crust compared to the subsoil.

Preliminary results have been obtained for the microbial community structure from open crust, crust near vegetation, and from the subsoil. Over 90% of fungal sequences in all samples were assigned to the Ascomycota phylum, a diverse group containing many lichen and mycorrhiza forming species. Overall the Proteobacteria were the most common bacterial phylum identified from DNA sequences, followed by the Cyanobacteria. Whilst the Proteobacteria were universally common, the Cyanobacteria were much more common in the bare crust than in other samples and were relatively rare in the vegetated crust. Species distributions of Cyanobacteria and other phyla were also found to differ between samples

Do some microbes exploit biocrusts?
Bio-physical competition for pore space and the micro-environment in BSC covered Kalahari Sand soils...
Australian biocrusts
Niche partitioning of bacterial communities in biological crusts and soils under grasses, shrubs and...
Tweets by drelliott0net