The Tour de France this week traversed the peak of Holme Moss at 524 m as Stage 2 passed through the peatlands of the Southern Pennines from Yorkshire and into Derbyshire. As Blel Kadri led the other riders over the summit the quality of the soil could not have been further from their minds. They were riding their carbon fibre bikes over what was historically a massive carbon capturing peat bog, but is now not very boggy. Peat is formed principally from dead sphagnum moss which decays more slowly than it is laid down due to waterlogged, cold, and acidic conditions (conditions which the moss helps to promote!). This causes an accumulation which is carbon rich and represents a significant sink of carbon. The remarkable preserving power of bogs is also valued by archaeologists, for instance consider Lindlow man – found in 1984 perfectly preserved in peat on Lindlow Moss for about 2,000 years! 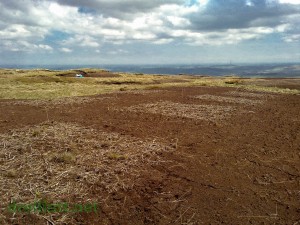 Holme Moss was no doubt named for its abundance of moss, but if you were asked to give it a descriptive name today then moss would not get a look in. This is because it has been degraded through a variety of processes and moss no longer flourishes there. In many moorland areas nothing flourishes and we are left with a severely degraded landscape of bare peat which is highly susceptible to erosion because there are no plants at all. This impacts on water quality and releases carbon stored in the peat.

As a child walking these hills I had no idea that there was anything abnormal about the barren landscape; I expected to see bare peat and gullies when walking the moors. Now I realise that these peatlands used to be effective carbon storage systems supporting a rich biota, and I am investigating the roles of microbes in the restoration process. There are multiple factors which have contributed to the degradation of Holme Moss, which like many upland areas has been managed to some extent by humans for hundreds of years. 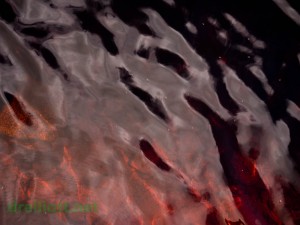 Peat coloured water in a reservoir near Holme Moss

Typical land management decisions on moorlands may influence factors like burning frequency, livestock density, peat harvesting, and tree suppression – all of which interact and are important determinants of soil quality. In addition there can be unintended influences on the land, and in the case of Holme Moss air pollution from the industrial revolution has been of particular importance. The problem of air pollution in Manchester was recognised as early as the 1840s by Robert Angus Smith who discovered acid rain and realised that contaminants in the atmosphere were impacting plant, animal, and human well-being. Following the clean air acts starting around 1956 air quality has improved markedly, but the moors around Manchester have suffered well over 100 years of air pollution including large amounts of sulphur and heavy metals deposition. This is particularly devastating for upland peat bogs because naturally there is very little input to the system (mainly just clean rain and sunlight), so the peatland organisms are adapted for such conditions. The legacy of industrial pollution is still readily detected in the peat of Holme Moss in areas where the surface has remained stable, whereas the eroded areas do not have a pollution signature because the polluted layers have been washed away exposing peat from before the industrial revolution.

The bare areas on Holme Moss despite being chemically quite pristine did not re-vegetate naturally, so restoration activities have been carried out to the point that most of the bare peat has now been re-vegetated. This has halted erosion but probably is not yet contributing significantly to formation of new peat because the amount of sphagnum moss is quite low. For more information about the problem of bare peat and how it can be tackled see the Moors for the Future website.

I am interested in the microbial component of the peatland ecosystem which is relatively poorly understood, and aligns with my other interest in biological soil crusts (BSC) which are important components of dryland ecosystems. BSCs exist on bare patches of ground mainly where vascular plants are not present, and they perform similar ecosystem functions to plants owing largely to the presence of cyanobacteria which can fix both carbon and nitrogen from the atmosphere. They also perform stabilisation and hydrological functions. Mosses typical of moorland bogs are quite similar to dryland BSCs in many respects, and so are areas of bare peat (absence of plants=opportunity for photosynthetic microbes). Together BSCs and mosses, as well as lichens and liverworts can be classified as cryptogamic covers as explained by Elbert et al (2012):

Many terrestrial surfaces, including soils, rocks and plants,
are covered by photoautotrophic communities, capable of
synthesizing their own food from inorganic substances using
sunlight as an energy source. These communities, known
as cryptogamic covers, comprise variable proportions of
cyanobacteria, algae, fungi, lichens and bryophytes, and are
able to fix carbon dioxide and nitrogen from the atmosphere.

This paper goes on to estimate the global amount of cryptogamic covers and their contribution to global carbon and nitrogen cycles. No easy task, but in the end it is worth the effort because remarkably they find that these often overlooked organisms contribute about 7 % of terrestrial net primary production (carbon fixation) and 50 % of terrestrial nitrogen fixation. Furthermore they suggest that cryptogamic nitrogen fixation may significantly support carbon fixation by vascular plants too. Following up the supplementary materials in that paper I found that sphagnum based peatlands are not very clearly identified in the analysis because of a lack of data, which is suggestive of a need for more quantitative research. In any case peatlands have long been recognised as important carbon sinks and stores. For instance in 1991 Gorham estimated that boreal and subarctic peat account for about 1/3 of the global soil carbon. Clearly these areas have been very effective carbon sinks to achieve such size, and their future performance will be an important factor for global levels of atmospheric CO2.

Let’s hope that the next time le Tour crosses these hills Holme Moss will again be mossy!

Marcel Kittel in the yellow jersey on the descent of Holme Moss.

Thanks to Robin Sen for help in preparing this article.