Over 70% of upland peatlands in the Southern Pennines are degraded, with extensive areas of bare unconsolidated peat incised with networks of gullies often down to the bedrock. Land management, air pollution and climate change are implicated as major factors leading to loss of vegetation and susceptibility to erosion. Over the last 40 years, efforts have been made to re-vegetate bare peat in order to recover biodiversity, hydrological function, and carbon sequestration capacity. These restorative efforts began relatively soon after the clean air act, but even now over 50 years later is easy to detect the signature of historical air pollution in the surface layers of peat at Holme Moss. Ironically the most severely degraded bare peat is the most pristine in terms of heavy metals contamination because the polluted surface layers have been eroded away, yet it does not naturally re-vegetate. 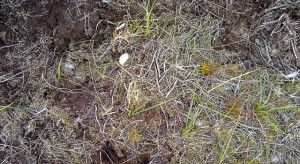 We characterized microbial communities in this varied landscape with the aim of better understanding the role of microbes in natural and managed moorland restorations, as well as collecting primary data identifying the indigenous microbes of peatlands. This is important because microbes underpin peatland resilience and functioning but their identities and ecology in this ecosystem are very poorly known. Sampling encompassed unvegetated peat and peat from 5 vegetation classes: undisturbed dwarf shrub vegetation, naturally regenerated cotton grass/grass spp. dominated gully vegetation, introduced lowland nurse grass spp. and 1- and 25-year-old restored heather. In addition to microbiological analyses, soils were analysed for standard physico-chemical properties that included heavy metal status. On the basis of high-throughput sequencing of phylogenetic DNA markers (16S- and ITS1- rRNA), bacteria and fungi were assigned to operational taxonomic units (OTUs) at approximately species level. OTUs were taxonomically classified by searching the Greengenes and UNITE DNA sequence databases, enabling probable functions to be estimated based on existing knowledge of related microbes. Significantly more culturable bacteria and fungi were detected in all vegetation classes compared to non-vegetated peat. Bacterial phyla were identified that are known to be involved in ecologically important processes including nitrogen and carbon fixation and methane oxidation. The fungi were predominantly ericoid-, ecto- and arbuscular-mycorrhizal fungi, yeasts, saprotrophs and plant pathogens.

Budget 2020: enough cash for trees and soil?
The Influence of Trees, Shrubs and Grasses on Micro-Climate, Soil Carbon, Nitrogen and CO2 Efflux: P...
Soil microbial diversity and spatial distribution across peatland vegetation mosaics under restorati...
Geomicrobiology of basal ice in a temperate glacier: implications for primary microbial production a...
Tweets by drelliott0net